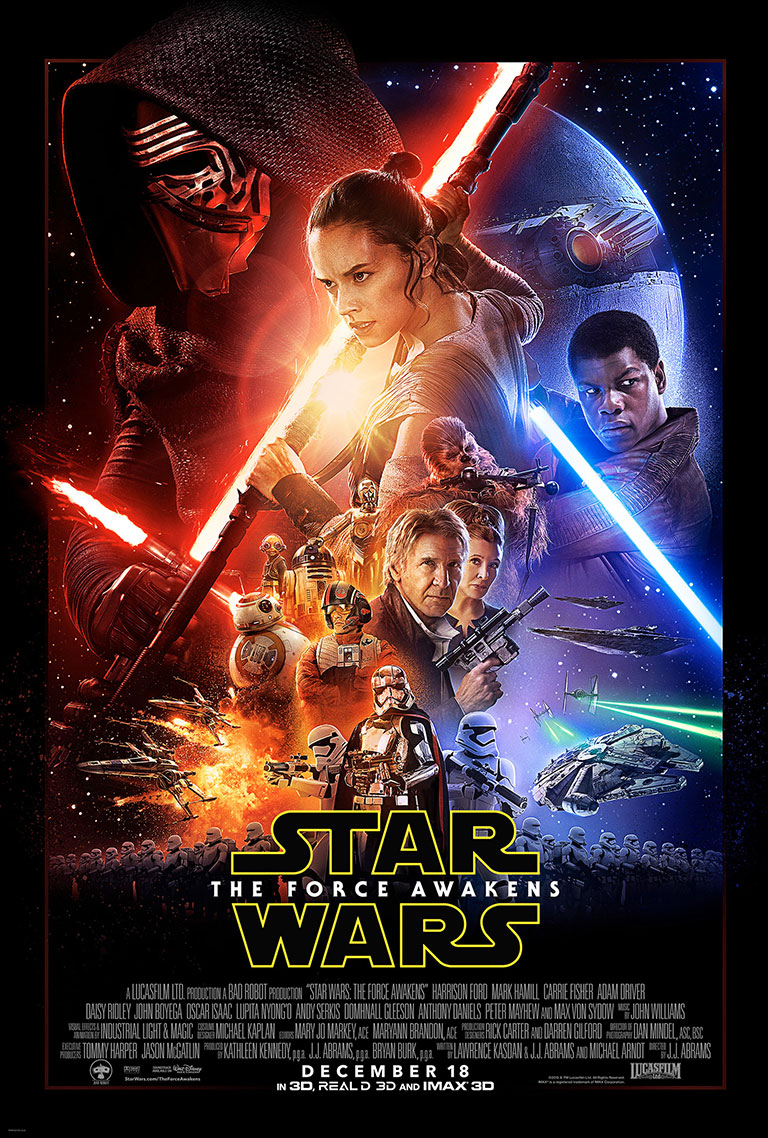 I finally had the chance go see the movie. After a few weeks it’s somewhat safe to start discussing the awaited movie of the year.

It falls in-between. I’ve been reading a lot of opinions and they are all very different. I’d like to share mine with you, see if we agree or not.

The story did not feel new

It felt like watching the original trilogy once again, with better effects and additional characters. The bad guys creating a big badass weapon that can erase entire planets off the map. The rebels will stop it from going any further, with success, of course.

I loved, however, the small reminders of the old movies. Han Solo and Chewbacca, classic, loved them. Harrison Ford gives an excellent performance. Too bad he gets killed.

The first time the Millennium Falcon appears in this movie it gave me goose bumps. Wow, it’s back I thought. Then Han Solo shows up, it’s time to kick some ass like the old times. Until he sacrifices himself for no good reason.

Some people are “ok” with him being dead. Well, I’m not. It was pointless. Kylo Ren, his stupid and conflicted son who can not even kill a stormtrooper or an untrained soon-to-be Jedi, needs his “help” to become even darker. Good job dad, father of the year for letting him kill you so he can eventually be a Sith Lord (or whatever name they’ll call themselves now).

Not only is Han Solo dead but forgotten too. The scene when Chewbacca returns with the injured Finn, there’s not even a glance or a hug with Leia. They had the strongest connection with Han, but hey let’s first have a hug Rey and Leia.

Cool light saber bro, why don’t you learn how to use it before trying to show off. You got your ass whooped by a character that had no Jedi training. Yeah Rey “feels The Force” but she never used a lightsaber before. How the hell did she beat the villain?

If Rey (you know it means “King” in Spanish, right?) can really use The Force (which is more than fine with me), shouldn’t see at least get some training like Luke did? Could you please make her struggle a little with this new powers. Why did you make her so good she could use mind tricks on her first try? That was no fun.

Could you give me a “wow” moment, please?

If I were to ask you about 3 scenes that left you amazed from episodes 4, 5 and 6 you could probably name them in a blink.

Now, if I ask you about a single jaw dropping scene in The Force Awakens… What do you say?

I can’t think of any. There are good parts here and there but not full sequences that were really amazing. The swords fights sucked, the space combats were not that cool and… nothing else.

I couldn’t have done it any better

Don’t get me wrong. I respect J.J. Abrams for coming up with this result. Trying to please the old hardcore original trilogy fanatics while engaging the newer audience can’t be easy.

It’s a good movie if you think with a bigger perspective. There is a lot of crap in theaters right now. Problem is, for Star Wars, it was not good enough. You can not make me think: well, this will lead to a great scenes in the next movie. Or, let’s do a “wait there’s more” at the end of this movie, so they know we’ll release two more. The final scene with Luke is bullshit. I would’ve preferred not showing any of him and doing the stupid try-to-be cliffhanger everybody is doing nowadays.

I would rank The Force Awakens between the original trilogy and the first, second and third episodes. Not only for story but the acting was already better. We all remember Anakin Skywalker.

If you were to ask me things I liked I would say: the rogue stormtrooper, I find this story fascinating. We have never seen anything like this and I’d like to see more about it in the following movies. Why did he do it? How do they train them?
Another thing I liked was the villain, yes he’s weak but it’s the first time see a villain fighting to not fall into light side. He wants to be like Vader so much but at the same time there’s light in him.

I entered the cinema so excited, I left sad and disappointed

Did you like it? Do you hate it? Did this movie meet your expectations?